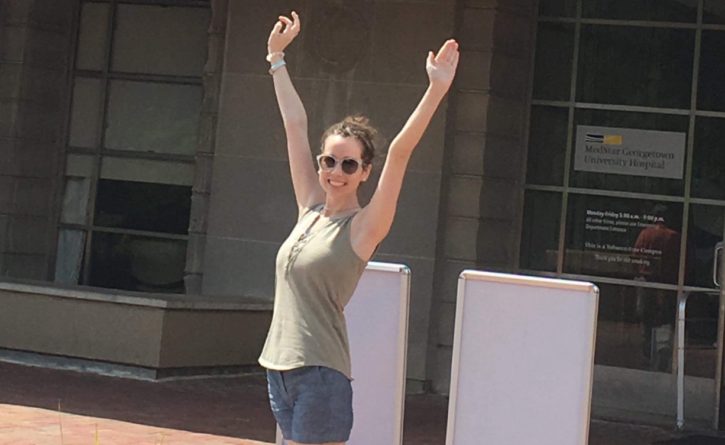 Diana Donnarumma of Clarence is one remarkable woman. At the young age of 26, she should be living her dreams at a job she loves and spending her weekends enjoying a cocktail. However, Donnarumma can’t do these things – not yet anyways – but she knows someday soon she will.

That’s why she continues to fight.

Donnarumma struggles with a very rare autoimmune disorder, which causes her to not be able to eat real food. She just had a major transplant because she desperately needed a small and large intestine. She also had part of her stomach removed.

“God put me through all of this for a reason, one I will probably never understand, but it is because he can see the whole puzzle when I can only see one puzzle piece.”

Her journey started when she was going to college in Miami and found out she had been undiagnosed with Lyme disease for 12 years. That turned into a condition called Dysautonomia which causes malfunction of the autoimmune system. Donnarumma threw up for several hours a day because the muscles in her stomach could not contract food properly, which led to weakness and eventually unconscious. It’s been a very rough road, so when she finally got the call that her transplant was ready to be done at Medstar Georgetown University Hospital in Washington she was elated.

Donnarumma spent nine long months at the hospital after the transplant where she had to overcome severe pain and illness, but now she’s happy to be home sweet home.

“I was so excited to get home to Buffalo to see friends, family and loved ones. I can tell you one thing, DC made me appreciate Buffalo so much more. After all they don’t call Washington ‘the city of good neighbors,'” she said.

After the transplant, Donnarumma spent two months in inpatient but was constantly admitted again due to vomiting, malnutrition and having blood levels off. She had two more surgeries after the transplant. One was to reverse the ileostomy that was placed for transplant for endoscopies and biopsies to check for rejection.

“The team said my new bowels were made just for me, as if it was the perfect match, however my stomach was not. Thus, the head surgeon did another open cavity surgery called a roux-en-y, which is almost like a gastric bypass. Literally my stomach is now the size of a walnut. I did code a few times in the hospital, however, I’m still here and fighting.”

Donnarumma is on artificial nutrition again, but she is starting to eat small snacks about six times a day. She went from not being able to eat drink or take any oral medication to re-teaching her body and intestines to process everything.

Her first goal is to get off TPN (IV Nutrition), but that means she needs to consume about 1,200 calories a day orally. The transplant team in Washington are going to keep a close eye on Donnarumma and will still have to see her regularly.

“Due to the kindness of all those who have prayed on my behalf, your prayers have worked. I’m finally home right where I belong. As Dorothy says, ‘there is no place like home.’ What’s even better is the fact I can sleep in my own comfortable bed while I continue the journey to health.'”

While Donnarumma was fighting the autoimmune disease, she and her mother came up with the idea of creating fashionable backpacks for those who have to carry TPN and tube feeds. They are called Chronically Fit and their mission of “sick doesn’t mean unfashionable” is very inspiring. For more information, visit https://m.facebook.com/chronicallyfitbackpacks/.

"To this amazing woman assigned to my nutrition services, thank you for putting a smile on my face today. One person CAN change the world and smiles are contagious."Spread positivity ❤️Video courtesy of Diana Donnarumma

My invisible illness does not define me: A story of strength

A 14-year-old fearful shelter dog is in need of a home. Abby is a small dog who needs to go