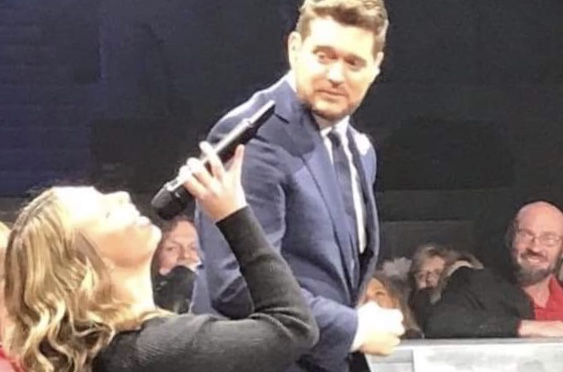 Nicole Zahn of Buffalo is on cloud nine today. I mean wouldn’t you be if you just sang your heart out to “Hallelujah” with Michael Buble? Well, here’s the story.

It all happened last night. A regular date to a Buble concert with her boyfriend, Matt Burghall, led to an incredible experience Zahn will never forget. It was that day the two decided they wanted to upgrade their tickets to second row of the concert.

They were enjoying their evening listening to Buble when all of a sudden the famous singer asked if someone wanted to come on stage and sing with him. That’s when Burghall went on a mission to see that his talented girlfriend was chosen.

“He was yelling, ‘She can sing! She can sing!’ So I said, ‘Yes, I can sing! I can actually sing!’ And then [Michael Buble] had me come up on the stage. I froze a bit. I was in shock that I was actually touching him,” she said.

Zahn was so nervous that when Buble asked her what song she wanted to sing, she almost didn’t know what to say, but then her favorite “Hallelujah”  came to mind and she just went for it. Bublé looked at her in awe.

“It’s funny, I don’t know how I was so confident. Normally I’m very nervous singing in front of people, so I don’t know what happened. I just went for it,” she said.

Zahn was so good in fact that many came up to her after the show and asked her if it was staged. She assures everyone it was not. She hasn’t sung in public in four years, but it’s always been a dream for her. She said that her parents encouraged her to go to college (she’s still in school and works as a nurse at Buffalo General Hospital), but now they might have had a change of heart.

“They always wanted me to have a stable job and I do love my job, but they called me today and said maybe this is your big break and I said, ‘Hey, wait! I thought you guys were all about working and school! It’s funny how things change.”

For those who were as impressed by her performance as we are, Zahn has some exciting news! She recently signed on as a singer with the band Hit N Run, so watch for her this summer!