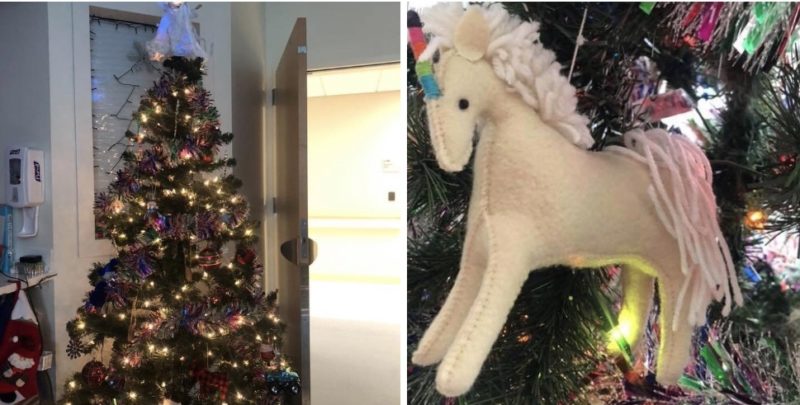 Maryanne McMahon of Grand Island has the coolest volunteer gig in the world. She’s pretty much Santa’s helper and she’s been at Children’s Hospital putting giant Christmas trees in patient’s rooms since Thanksgiving weekend. One of which was Mikey Barone’s room, the 16-month old boy we’ve been telling you about. This is McMahon’s sixth year of putting up the trees and she says it means the world to her when the children and their parent’s eyes light up with joy. 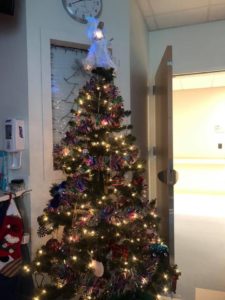 “I’ve been cooking at Ronald McDonald house for many years. I got close to a family with two  kids, both at Roswell. We’re very close to them and I did it for them. I thought, I don’t have to know the kids to do it so the next year, so I started doing it for every kid at Roswell. I moved to Children’s this year because they moved oncology there for pediatric oncology patients. I was lucky to connect to the ‘regular’ floor and do this,” she said. 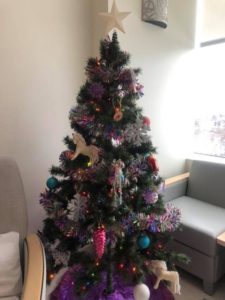 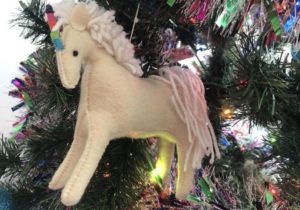 McMahon brings choices from top to bottom for the tree and the kids and their parents pick out everything. From Buffalo ornaments, to teddy bears and a pink Christmas tree, McMahon is spreading joy in a huge way and making patients feel more comfortable when they can’t be home for the holidays. 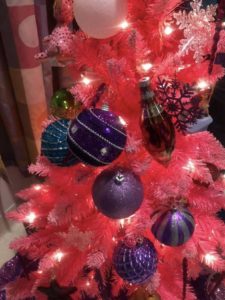 “When we returned to Mikey’s room there was a very nice woman named Maryanne and her son, Jacob, waiting so they could set up a 6-foot tall Christmas tree for Mikey and us. They said this is something they do at multiple hospitals for multiple patients for the last six years, setting up trees in the rooms of long-term patients so they can enjoy a festive Christmas, even if it is in the hospital. What a wonderful city we live in,” said Mike Barone, Mikey’s dad, in a Facebook post.

Maryanne and Jacob know what it’s like to spend time in a hospital. Jacob is a veteran of the Marines who survived being blown up in an explosion. He healed miraculously with stem cells and is now giving back with his mom. Jacob’s dad usually helps, but he’s out training at the Federal Police Academy, so Jacob was her main man this year. 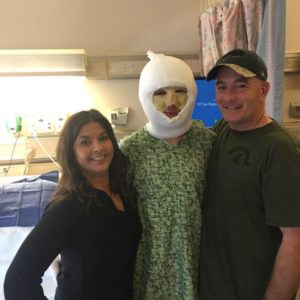 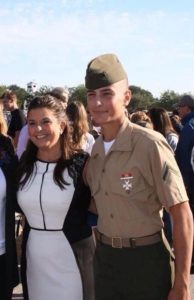 “I’ve always cared for these families. Not that it’s the same, they have it worse with cancer, but, now I do what I do even better for them because I understand their situation a little more,” she said.

And since she knew a few other people could use some Christmas cheer, she put up a tree for the nurses with ornaments she bought herself. 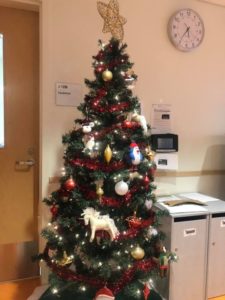 “They loved it. I’m talking, might be happier than the kids we did that day. I let them pick everything and decorate it themselves. They were so happy. I used everything I bought for this one because I wasn’t sure how people would feel that donated for the kid’s trees. They said night shift will be so much better now with it.”

Merry Christmas, McMahon family. Thanks for making the world a better place!

If you’d like to make a donation of a new Christmas tree or ornaments to Maryanne, email Maryanne236@hotmail.com.