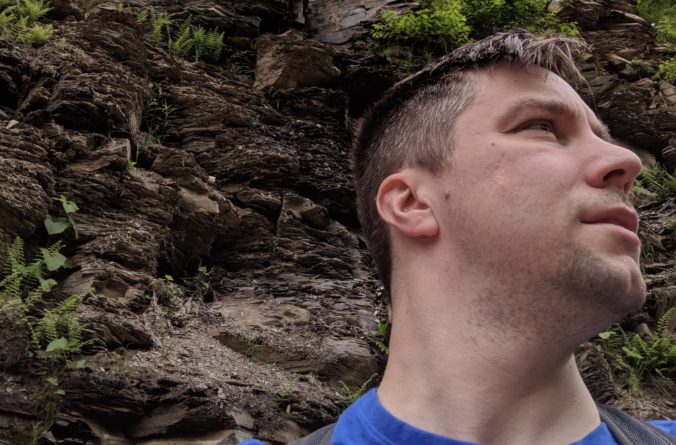 Giovanni Mion of Blasdell was only 11 years old when he lost his father. His mother woke him up in the middle of the night to tell him that his father had a stroke and he needed to go in their room and make sure his father stayed in bed so she could run to the kitchen to call 911.

“He was a real-life zombie. He was sitting up, both arms out like Frankenstein and one side of his body was lower than the other. His eyes were rolled back into his head open, I saw white, and he had an  indecipherable groan he kept doing. I did all I could to keep him in bed.”

Mion’s father went into a coma. After two weeks, he had brain damage so bad that even if he did survive, doctors said he would be a vegetable for the rest of his life. Mion’s mother knew her husband wouldn’t want to live like that and so he passed away the night before Halloween. Mion and his mom tried to go on living their life as normal as possible until tragedy struck again.

Three months later, Mion was playing in a basketball game that his mother attended. His mom approached him that her foot was hurting and that she needed to go home and rest and a friend would take him home after the game. Mion recalls doing housework that weekend and on Monday, he woke up to find his mom in the living room with the television on and her foot propped up on the La-Z-Boy recliner.

Mion’s mother repeated over and over to him that this wasn’t like what happened to his father. The EMTs told him the same thing. His mother had an infection in her foot that could be treated with antibiotics and the worst thing that could happen is she might need to stay at the hospital overnight for observation. They were wrong.

Mion’s mother had a very rare flesh-eating disease that required emergency surgery. The disease destroyed everything below her knee and she had to have her leg removed. She endured continuous surgeries for weeks. This was only the 11th case of the disease found in North America and no one had survived it.

“At that point she knew that she didn’t want to go through treatments, so she stopped them and accepted her fate,” said Mion.

Mion recalls his siblings sending him for counseling, but he didn’t want to go and thought it was a sign of weakness.

“I was a know-it-all 12-year-old who knew exactly the best course of action for me. I answered the counselor’s questions in a way that I knew would give me a diagnosis of ‘he’s fine’ so I didn’t have to be in counseling. The joke was on me though because I wasn’t doing fine.”

Mion suffered from depression, but he didn’t know what it was at the time. He moved in with his older sister and her children who lived in Buffalo and had to start all over at a new school. He said he was nervous that his peers wouldn’t accept him, so he used his story as a way to gain sympathy.

“Acceptance is huge. Being cool, making friends, fitting in. I had that in Michigan, but I was starting completely over and didn’t know how to get that. If people found out what happened to me, I figured they’d feel sorry for me, so I used my story as pity,” said Mion.

But while everything seemed fine on the outside, Mion was hurting on the inside. He didn’t want to ask for help, he didn’t trust authority, and he set himself up to go through his journey alone, something he regrets entirely. He was in a dark place for many years until he started viewing life through a different lens.

“If I could tell my younger self something it would be to ask for help. Vulnerability is not a weakness.”

Mion recently published a book called “My Orphan Journey: How I Found My Way After My Parent’s Death.” In the book, Mion shares his journey and tips on how to surround yourself with the right people and start believing in yourself again. Mion believes his parents were setting him on the right path, but after their passing, he lost his way. At 35 years old, he feels he’s found it again. He’s a husband and father to two children and operates a youth coaching business. He says not only will the book help others, it’s also helped him.

“I had to play the hand I was dealt and push through the dark times in order to live a life my parents would be proud of. More importantly, a life I was proud of again.”

You can preorder “My Orphan Journey” here.