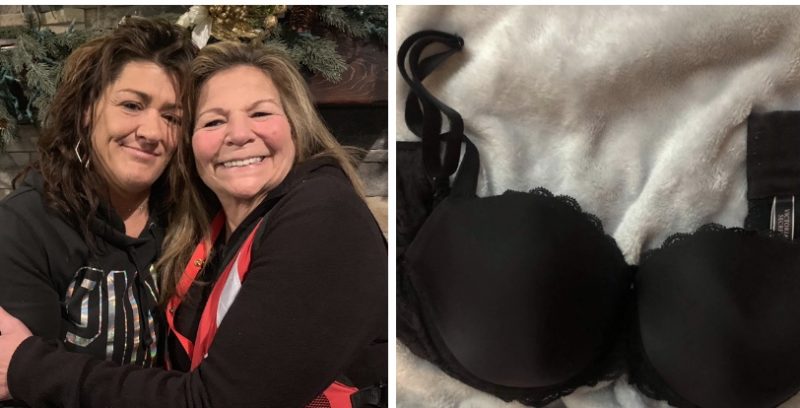 A Red Cross volunteer has changed the meaning of “would give the shirt right off her back” to “give the bra right off her chest.” Literally.

A few weeks ago JoAnn Bradley of Niagara Falls found herself in a terrible nightmare when her house became engulfed in flames. She and her family lost everything that day, including their beloved pit bull, Luigi, who saved their lives on that tragic day.

Scared and overwhelmed with emotion over what had just happened to her, JoAnn found herself in the hospital with only the clothes on her back. That’s when a volunteer from the Red Cross embraced her and said, “What do you need?”

“I don’t know how or why the words “I need a bra” came out of my mouth, but it did, and no more words were spoken until she went across the hall into a bathroom, took off her bra, and gave it to me. I don’t know her name, but whoever she is, she needs to know how special and unforgettable she is. If I ever run into her again I would give her the biggest thanks I’ve ever given anyone because what she did went far beyond what any normal human would do.”

Well, thanks to your shares, JoAnn was given that opportunity today to see her angel, Frances, again. The Red Cross reached out to Sweet Buffalo to plan a surprise reunion for the two and JoAnn’s reaction is heartwarming.

Speaking with Sweet Buffalo, Frances Rego Galden, a volunteer with the Red Cross for two years, shared that she never felt so bad for someone in her whole life that she did that day for JoAnn. She started volunteering at the Red Cross after seeing a commercial, following in her mother’s footsteps of wanting to give back. Now she drives around to do what she can to help someone every day.

Please share: Woman seeks to thank Red Cross employee for act of humanity after she lost everything in house fire